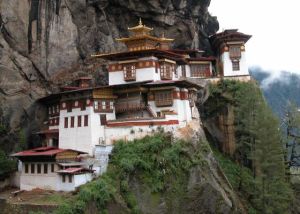 As the Duke and Duchess of Cambridge make a brief stop in Bhutan on their state visit to the area, suddenly everyone’s wondering where is Bhutan? Is it the new must-visit holiday destination?

Here’s my mini guide, compiled as from research for a feature I wrote about visiting India and Bhutan for Woman. The Bhutan bit was dropped from the published piece for reasons of space.

10 things you didn’t know about Bhutan

• Bhutan is in the Himalayas, bordering India and China.

• The kingdom of Bhutan was closed to mass tourism until 1974.

• To minimise the impact of tourism, the Bhutanese government insists on pre-planned, prepaid, guided package tours, at a minimum cost of $200 a day, some of which funds free education, healthcare and poverty alleviation.

• Scarf colour worn by men signifies status. Yellow is for the king; white for ‘commoners’.

• Designer Christian Louboutin is a friend of Queen Jetsun Pema, and utilised the country’s strong craft heritage when he had Bhutanese monks carving wooden-soled shoes

• The country has 13 traditional crafts including fabric weaving, bamboo weaving and iron chain-making.

• Gross National Happiness is used as a measure of economic success.